Should I Worry About Mites In My Home?

Mites. Just the thought of them is enough to make someone’s skin crawl. But could something so small as a mite pose a threat to a person? Well, the simple answer is a bit unsatisfactory, because — it depends. However, fret not! The pest control experts of Champion Termite & Pest Control are here to clarify this quandary by answering the following frequently asked questions about mites.

If you’re worried that there may be pests in your home, contact us today and schedule a pest inspection! 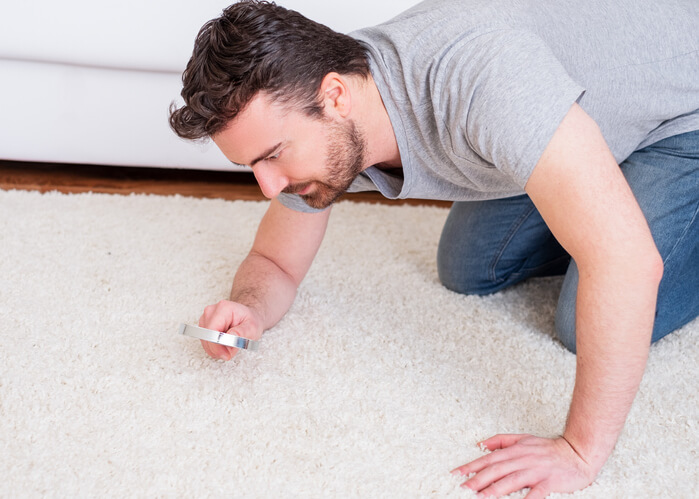 A common misconception is that mites are microscopic insects. However, they are actually microscopic arthropods — meaning they’re more closely related to spiders and scorpions. The majority of mites (of which there are at least 48,000 species) feed on insects or dead plant and animal substances. While it is unlikely a person will bump into a bulk of these mite species, there is one kind most people assuredly will: house dust mites.

Fun fact! The average human sheds roughly one million skin cells per day, and those skin cells are a dust mite’s favorite snack. Yes, you read that right — many of us share a home with nearly invisible arachnids that feast on flakes of our skin. As gross as that reality is, it’s not an inherently bad thing, which brings us to our next question.

Some mite bites can cause skin irritation, lumps, rashes, and, in some cases, more severe reactions. Fortunately, dust mites don’t bite at all! This is because they don’t have to, as we — their generous human housemates — sprinkle our dead skin around for them to snack on instead. Because they don’t feed on us directly, dust mites don’t classify as parasites and pose no immediate threat to humans.

However, despite posing no direct threat, large dust mite populations can indirectly harm people who suffer from asthma and allergies. Mites produce digestive enzymes known as proteases, which can cause allergic reactions in humans. When this excrement becomes airborne, sensitive occupants may experience difficulty breathing.

How Do I Know If I Have Mites In My House?

In a 2003 study, an estimated 84% of homes have a detectable dust mite population. The ugly truth is, if you live in a home, there’s a high probability you’ve got dust mites. However, an average dust mite population is nothing to sneeze at and will likely go unnoticed. It’s when occupants display increased allergic symptoms that there may be a problem.

Before taking any steps to reduce a problematic dust mite population, first inspect the home for bed bugs. Why? Dust mites and bed bugs induce similar allergic reactions in humans and, as such, are often conflated. Therefore, the best way to ascertain which pest you have is to rule out the other. Check mattresses in the home, if there are rust-colored smears, it’s bed bugs, so schedule bed bug removal services right away. If not — it’s time to fight some mites.

How Do I Get Rid Of Mites?

There are a few preventative measures for keeping dust mite populations in a home under control. The simplest of these is managing dust by vacuuming and reducing clutter around the house. Another way is to frequently wash bed sheets and pillowcases (where mites are most commonly found) in hot water. Also, encasing mattresses and pillows in dust-proof coverings will make those areas less accessible to dust mites.

Conversely, if you or a loved one are currently experiencing symptoms related to dust mites — contact a local exterminator. Getting rid of dust mites alone can be tricky and time-consuming, but seeking professional help can streamline the process.