Scorpions are venomous pests that seek shelter in your home. These uninvited house guests can bite you, your household, and your pets. They hide and lurk in hard-to-areas. They can easily enter your home and can be very difficult to remove. If you see scorpions in or around your home, contact a pest control company that is experienced with scorpion control. Contact Champion Termite & Pest Control to schedule a free property inspection and receive a free quote. 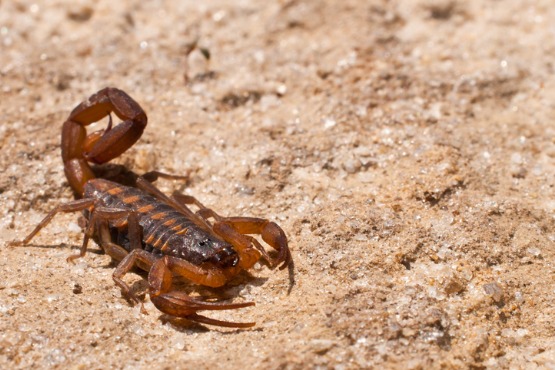 Scorpions are not insects, they are arachnids like spiders. They are nocturnal and come alive at night. In fact, they glow in the dark under black light. During the day, they hide in cool, dark places like crawl spaces, closets, under baseboards, and in walls. All scorpions have venom but do not have venom poisonousness enough to affect a human. Depending on the species of scorpion, the bite could feel like a bee or wasp sting.

The Florida Bark scorpion, also called the slender brown scorpion, is the largest species of scorpion in Florida. Bark scorpions can grow up to four inches long and have brown bodies with light-colored legs and yellow dashes on their backs. While the stings of these scorpions aren’t as venomous as bark scorpions native to Central and South America, their sting is still extremely painful, and the toxins can lead to more serious symptoms.

The Hentz Striped scorpion is the most common species of scorpion in Florida and is typically 2–3 inches with a dark brown or tan color. In addition to their color, they also have greenish-yellow stripes on their midsection. These scorpions have a slender abdomen and a tooth behind the venom bulb.

Often identifiable by their primarily yellow bodies, Guiana striped scorpions are one of the least common types of Florida scorpions. These scorpions are often found under stones, bark, or vegetation. While not as venomous as the Florida Bark scorpion, the effects of the Guiana scorpion sting can last for up to five hours.

Unlike spiders, which use fangs to inject venom, scorpions have a stinger at the end of their tail used to inject their venom. While these stings are not fatal to humans, they can cause allergic reactions and be extremely painful, lasting for several hours. Scorpions feast on insects inside and outside your house. When they are unable to find their prey outside, they may make their way into your home through gaps, under doors, or through windows

To help prevent scorpions from making your home their new home, start by cleaning up to reduce the places they can hide, such as debris, dense vegetation, and piles of firewood. In addition, check your firewood for scorpions and other pests before you bring it inside to avoid bringing them indoors. It is also important to make sure all your windows and doors are effectively sealed. Scorpions eat insects and termites, so overall pest control and prevention will help scorpion prevention.

How Our Scorpion Exterminators Can Help

At-home and DIY methods of scorpion removal are not recommended. They have a painful, venomous sting and are difficult to capture and kill. Call a professional pest control service for a safer and more effective resolution.