What To Know About Bees, Wasps & Hornets

While spring and summer mean vacations, swimming, beaches, and other open-air recreation, wasps, hornets, and bees can become uninvited guests to your outdoor merriment. Not only do they pose the threat of stinging, which can result in allergic reactions, but their presence and nests can be a nuisance.

So, how do you protect yourself and your property from these flying menaces? The professionals from Champion Termite and Pest Control, Inc. are here to provide you with some helpful tips to safely identify bees, hornets, and wasps, and how to control them.

Contact us today for all of your pest control needs! 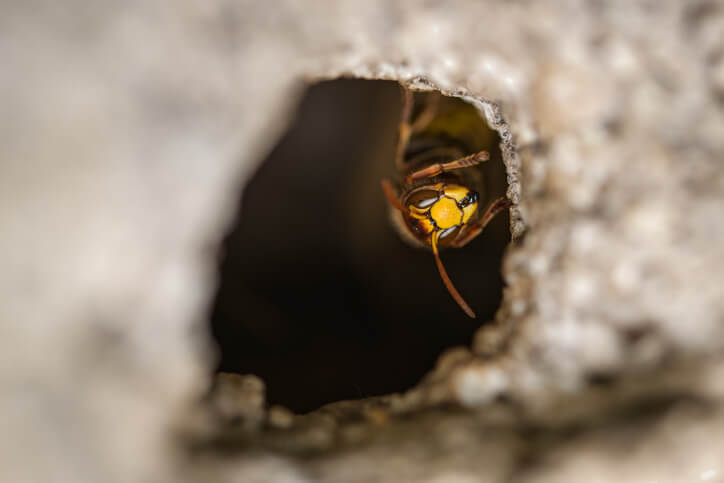 Florida is home to over 300 species of bees, including honey bees and bumblebees, none of which should necessarily be considered as pests. In fact, bees are instrumental in more than just the creation of honey. By pollinating flowers, they help create the foods we eat every day, including apples, almonds, squash, vanilla, and more. However, because many species have stinging instincts, they can become a nuisance if they end up nesting on your property.

So how do you identify these little helpers and safely deal with them? Unlike other stingers, most bees have fuzzy bodies. Their wings are also usually rounded at the tip instead of ending in a point. Of course, you shouldn’t purposely get so close that you can make out these small differences ⁠— that should be left to professionals.

Where you’ll find bee nests depends on the species. Many of them are attracted to wood surfaces, including hollow trees, decayed trees, and unpainted wooden structures. However, some of them may nest on the ground. Unlike common depictions, most bees aren’t likely to create nests where they are exposed, such as from a tree branch.

Interestingly enough, hornets are a type of wasp, but not all wasps are hornets. Just like with bees, there are several species of wasps, but paper wasps and cicada killer wasps are the most common in Florida.

Unlike bees, wasps tend to have less hair on them. They also usually have a narrow or pinched waist, unlike the more bulbous bee. They typically have yellow, black, white, or orange markings. Wasps generally nest in branches, along fences, in eaves or gutters, in attics, porch ceilings, window corners, underneath porches or decks, and inside grills or hose reels. Ensuring that screens on windows and doors don’t have holes or tears where they can enter and that gaps in soffits, attic vent screens, and underneath shingles are sealed can help keep them away.

Knowing what attracts wasps can also help prevent them from taking up residence. In contrast to bees, wasps are predators. This means that they will be drawn to meat, crumbs, and spilled drinks, making a typical summer BBQ the perfect hunting ground for a hungry wasp. To avoid attracting wasps, keep foods covered during outdoor get-togethers. They’re also attracted to rotting fruit, so if there are any fruit-bearing trees or shrubs on your property, try to remove fruit as soon as it falls off the plant. You should also plant flowering plants away from property structures.

While hornets weren’t commonly found in the United States, shifting climates have made their appearance more regular on the east coast. The most common hornets are the European hornet (or brown hornet or giant hornet) and the bald-faced hornet, which isn’t actually a hornet but is referred to as one because of its large size. Hornets are similar looking to wasps but are larger.

As we mentioned earlier, bees don’t typically make their nest from tree branches, but some species of hornets do. They will also choose other exposed areas such as utility poles, shrubs, and eaves, depending on the species. Other species, however, will opt for more seclusion, like in hollow trees or barns.

Both wasps and hornets don’t lose their stingers when they sting as bees do, so they are more than happy to sting you repeatedly, which can be incredibly painful, even if you aren’t allergic to their venom.

No matter what the stinging, winged insect might be, it’s always best to let the professionals handle it. In the case of bees, bee handlers can remove the nest and take the bees to a safe location. When it comes to wasps and hornets, though, an experienced exterminator can handle any infestations.